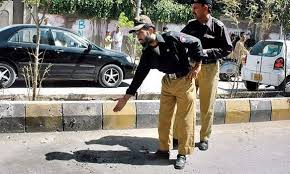 Two police officials, including an assistant sub-inspector (ASI), were martyred on Friday after an unknown assailant opened fire on them near Quetta’s Eastern Bypass, officials said.

Quetta Deputy Inspector General (DIG) of Police Syed Fida Hassan Shah confirmed that an unknown assailant had opened fire on police officials. “As a result, two police officials were killed while a driver was injured,” he said.

He said that one of the the deceased was an ASI while the other was a constable.

Earlier reports suggested that the assailants had opened fire on a police van. However, CCTV footage later showed a gunman firing on the officials as they ate at a local hotel.

Balochistan Chief Minister Mir Abdul Qudoos Bizenjo condemned the incident in a statement and expressed grief at the deaths in the “terrorist incident”.

“Destructive elements want to disrupt peace in the province,” he said, adding that there would be no compromise regarding the law and order situation.

Bizenjo said that the people of the province stood by the police and security forces. “Police officials and personnel will not be scared by such cowardly acts,” he said, issuing directives for ensuring security in the area.