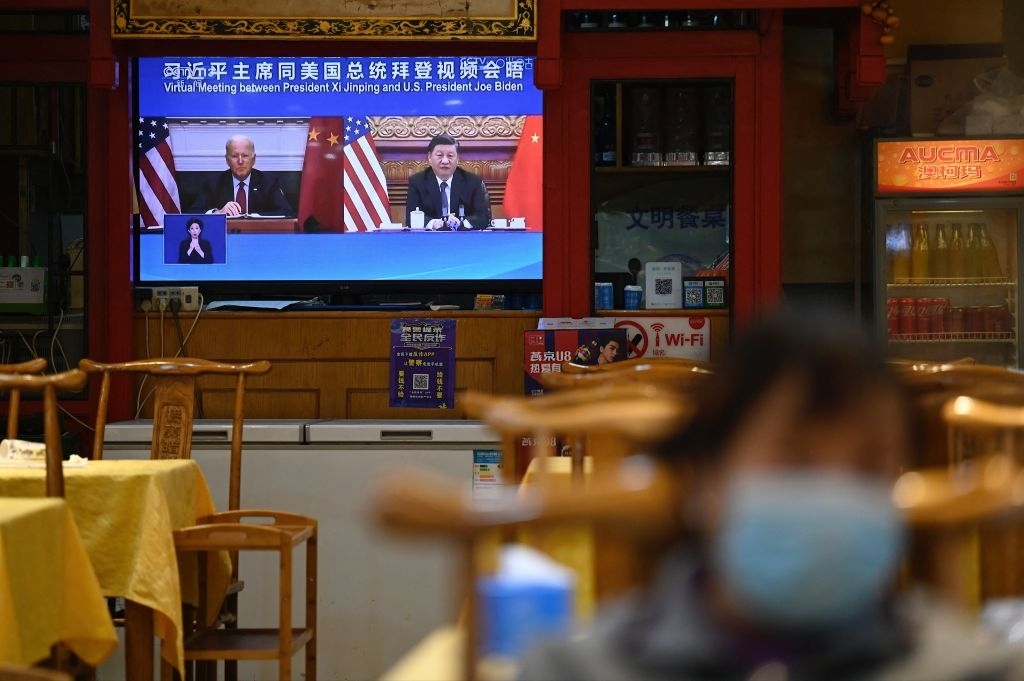 WASHINGTON/BEIJING: US President Joe Biden pressed his Chinese counterpart on Beijing’s human rights practices, in an over three-hour call on Monday, while Xi Jinping warned that China would respond to provocations on Taiwan, officials said.

The closely watched conversation between the leaders of the world’s biggest economies was described by both sides as frank and direct as the two sides tried to lower the temperature and avoid conflict.

The talks appeared to yield no immediate outcomes, but gave the two leaders the opportunity to nudge their relations away from icy confrontation.

Xi, who has not left his country since COVID-19 spread worldwide nearly two years ago, compared the two countries to “two giant ships sailing in the sea” that needed to be steadied so they didn’t collide, Chinese state media reported.

“I hope that, Mr. President, you can exercise political leadership to return the United States’ China policy to a rational and pragmatic track,” Xi told Biden, according to Xinhua.

“It seems to me our responsibility as leaders of China and the United States is to ensure that our competition between our countries does not veer into conflict, whether intended or unintended,” Biden said during a short exchange observed by American reporters. “Just simple, straightforward competition.”

The two leaders had a “healthy debate,” a senior US official said afterward. Biden stressed the importance of China fulfilling its commitments under a trade negotiated with Biden’s predecessor, Donald Trump, the US official said.

China is lagging in a commitment to buy $200 billion more in US goods and services, but Chinese officials said Xi told Biden that it was important to avoid politicizing the issue.

The contentious issue of whether the United States will send White House envoys to the Beijing Winter Olympics in February did not come up, the US official said.

Sharp differences over Taiwan remain, it was clear after the talks.

While Biden reiterated US’s long-standing support for the “One China” policy under which it officially recognises Beijing rather than Taipei, he also said he “strongly opposes unilateral efforts to change the status quo or undermine peace and stability across the Taiwan Strait,” the White House said.

Xi said those in Taiwan who seek independence, and their supporters in the United States, are “playing with fire,” according to Xinhua.

“China is patient and seeks peaceful reunification with great sincerity and effort, but if Taiwan secessionists provoke, or even cross the red line, we will have to take decisive measures.”

A US official said “there was nothing new established in the form of guard rails or any other understandings” on Taiwan, though Biden raised “very clear concerns.”

Xi objects to Washington’s efforts to carve out more space for Taiwan in the international system, and recent comments by Biden that the US would defend Taiwan in certain cases also inflamed tensions.

China claims the self-ruled island as its own. Beijing has vowed to bring the island under Chinese control, by force if necessary.

Taiwan’s Foreign Ministry, responding to the talks, said it hoped that China could assume its “common responsibility” to maintain peace across the Taiwan Strait and resolve differences through dialogue.

Biden raised other issues that Beijing regards as its domestic concern, including its handling of Tibet, Hong Kong and Xinjiang, where China’s policies face frequent censure by foreign rights groups.

Biden and Xi have not had a face-to-face meeting since Biden became president and the last time they spoke it was via telephone in September. The US president smiled broadly as the Chinese president appeared on a large screen in the White House conference room.

“At least they are talking,” economist Wellian Wiranto from OCBC Bank in Singapore wrote during the talks. “That seems to be the main expectation by global markets when it comes to any concrete outcome — or a lack thereof.”