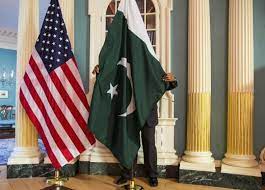 After the creation of Pakistan on account of division of the Indian Subcontinent, the USA was among the first nations to establish relations with Pakistan on 20 October 1947 and hoped it would remain an ally in South Asia, Central Asia and Eastern Europe for the time to come and serve US interests in these regions against the regional as well as global powers in the phase of global Cold War between the two superpowers and thereafter. As the USA itself was the most powerful and wealthy nation of the world, Islamabad viewed the country as its godfather in international politics and the first thing which Pakistan needed help in most, was its security threat from India.

Initially, the USA fulfilled Pakistan’s security needs by supplying armaments and other equipment from time to time, but it failed to solely rely on Islamabad for its strategic interests, especially after 1962 when the People’s Republic of China emerged as a powerful nation in the region in comparison to India, while on the other the USA did not want anyway to hurt either India or for that matter China, a communist country, but began preferring India more than China to check Beijing’s influence in South Asia and beyond. On the other hand, viewing US calculations closely, Pakistan too began coming near China to counter its tense relations with India.

Although the USA provided a huge amount, about $78.3 billion between 1948 and 2016 in the form of military aid, it never assumed Islamabad as its equal partner like others, and as a result, they both failed to establish their strategic and economic relations so far. It was a failure of Pakistan’s diplomacy with the USA, which focused on the security threat perception more than anything else, leaving their relations based on weak foundations even after seven decades of friendship and mutual understanding on a number of regional and global issues.

In the then Pakistan there were two types of forces available in the country, pro-capitalist as well as pro-communist and while in Eastern Pakistan, now Bangladesh, the majority of people were pro-USSR perhaps due to a fascination with socialism, in Western Pakistan most people liked capitalism because they saw the USSR as a supporter of India and so liked to be with the USA.

Initially, for many years, the West part of Pakistan remained dominant in politics as well as the administration, and ultimately the decision went in favour of the USA. In all the ways the USA liked Pakistan, supported the country in regional and global affairs and it became member of several alliances led by the USA, including SEATO and CENTO. It all made Pakistan a reliable and trusted friend of the USA, always ready to serve US strategic interests.

In this context, the efforts made by Liaquat Ali Khan, the Prime Minister of Pakistan, to establish friendly relations with both superpowers of the time, was foiled by the military and the Foreign Office which pleaded that the USA would supply Pakistan military, technical and economic aid to the country in proportion to the help the USSR would offer to socialist India.

After several ups and downs in Pak-US relations and a trust deficit between them as well as Islamabad’s growing relations and understanding with the PRC, Donald Trump, having taken charge as US President in January 2017, began reviewing all things in perspective and finally decided to withdraw from Afghanistan following the conclusion of an understanding with terror groups and Government of Afghanistan. It left on 15 August 2021, with Taliban forces forming a government. Its open support by Pakistan, once again, has posed a challenge to the USA for the time being and years to come.

In addition, the general people of Pakistan also liked the USA more than the USSR and, in line, a series of visits initiated on the part of Pakistan beginning with Prime Minister Khan’ s 23-day long visit to the USA in the first week of May 1950. In succession, many cabinet ministers, top officials and dignitaries of foreign office visited the USA, including the then Army Commander-in-Chief Gen Ayub Khan, who later became military dictator and instituted a strong pro-US lobby in the country.

In an important development, in 1956, on the request of President Dwight Eisenhower, Pakistan permitted the USA to lease the Badaber Air Station for the intelligence use of the US government and as a follow-up the latter had built an airstrip, command and control station. For serving US interests against the USR, the military regime was favoured most and this is why America focused on maintaining excellent ties with the military establishment in Pakistan.

The India-China war of 1962, and India-Pakistan wars of 1965 and 1971 brought a major perceptual change in the region and by the time against the close US-Pak relations and their rapprochement with China, India had also established a strong and durable relations with the USSR and in August 1971 it concluded a historic treaty to further safeguard its regional as well as global interests. However, in the context of Pak-US relations, the most important event was the USSR’s takeover in Kabul at the close of 1979 which totally altered all calculations and changed the direction of their relations in many spheres. It was an open challenge to the supremacy of the USA in the region and in the war against the USSR, the USA used Pakistan to a large extent which made Pakistan’s society and politics focused on US interests. As a result, Pakistan became a tool in the hands of the US intelligence agency, the CIA, and began working to oust the USSR from the soil of Afghanistan.

Pakistan prepared a multi-national group of Mujahideen and waged a guerilla war against the forces of the Soviet and Afghan governments. After a long war of one-decade, Soviet forces withdrew in 1989 and after a phase of anarchy, the pro-Pakistan rule of Taliban was installed in Kabul. The scope for strategic and economic relations between the two also minimised due to news about Pakistan’s nuclear development.

From the day Pakistan began to serve US interests against the USSR in the region, the flow of US funds and other help multiplied in the country and, in response, it gave all promises to keep the terror groups under control and eradicate them forever, especially in post-9/11 periods and when the USA launched a decisive war in October 2001 against the terror, particularly to grab terror leader, Osama bin Laden, and end Al-Qaeda’s terror network in Afghanistan. Pakistan assured the USa fully of its support and the use of US funds for the purpose were released. The pro-Pakistan Taliban government, which assumed power in 1996, came to an end at the close of the year 2001 and a pro-US government was formed in Afghanistan, which began fighting with US and allied powers’ forces in Afghanistan.

After several ups and downs in Pak-US relations and a trust deficit between them as well as Islamabad’s growing relations and understanding with the PRC, Donald Trump, having taken charge as US President in January 2017, began reviewing all things in perspective and finally decided to withdraw from Afghanistan following the conclusion of an understanding with terror groups and Government of Afghanistan. It left on 15 August 2021, with Taliban forces forming a government. Its open support by Pakistan, once again, has posed a challenge to the USA for the time being and years to come.