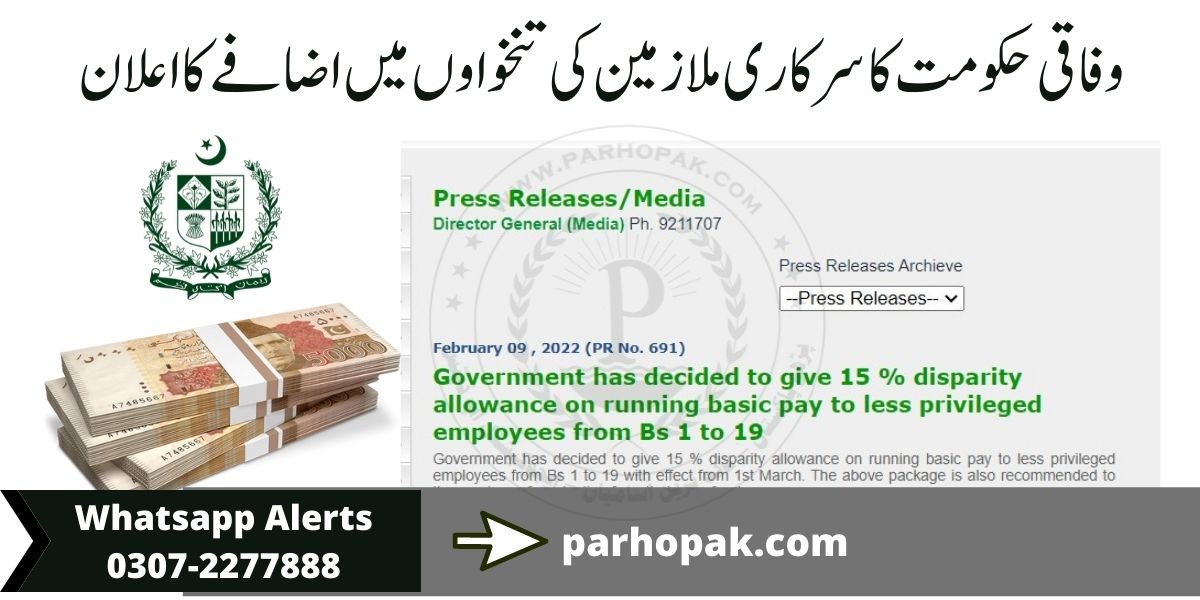 According to the Ministry of Finance, the Finance Division has prepared a summary for the development of employees in a timely manner under a time scale plan.

The Ministry of Finance has said that a 15% allowance will be given to the employees of scale 1 to 19 while the report of the Pay Commission is awaited to include the allowance in the basic salary.

The decision to integrate the ad hoc relief allowance into the basic salary will be taken later.

The government has decided to give a 15 % disparity allowance on running basic pay to less privileged employees from Bs 1 to 19.

The government has decided to give 15 % disparity allowance on running basic pay to less privileged employees from Bs 1 to 19 with effect from 1st March. The above package is also recommended to the provinces for adoption from their own funds.

Further, a summary for timescale promotion has been initiated by Finance Division to mitigate the hardship being faced by employees stuck in the same grade for a long time.

The matter of up-gradation of posts on the analogy of Khyber Pakhtunkhwa will be decided based on the findings of the study being conducted by MS Wing of Establishment Division by end April.

Further, the merger of Adhoc Relief /Allowances into pay will be decided on report of pay and pension commission and will be merged in basic pay as per agreement.

Federal Govt has also advised all Provincial Govt including Punjab, Sindh, KPK & Balochistan to increase the salaries with a 15% allowance. Now its all provinces decision that how they follow the federal govt.

For all the latest vacancies list Visit the Main Page of Parho Pakistan – Latest Jobs in Pakistan.