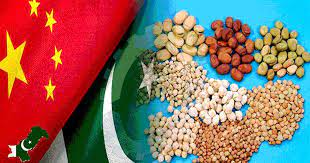 The focus of both countries involved in the CPEC remained on the energy sector and infrastructure development during its first phase. But in its second phase, a shift can be seen towards the agriculture sector, which was put on the backburner during its introductory stage. This is why the second phase of the corridor is being named “Green Corridor” because several MoUs have been signed regarding the development of the agriculture sector. The main areas included plant diseases and pest control.

The agriculture sector is considered to be the backbone of Pakistan’s economy. Undoubtedly, it is. It contributes 19 percentto GDP. But this percentage could have been taken to beyond 19 percent, if we had relied on advanced machinery and changed our farming techniques with changing time, growing population, and climate change impact. The friendship between Pakistan and China has always been exemplary. The latter has always assisted Pakistan in armaments and infrastructure development. There has always been a strong collaboration between Pakistan and China in these sectors.

China is using the most advanced farming tools and techniques that are time saving and are also more productive. Enough work has been done on infrastructure, energy, and road development. Focus on the agriculture sector is the need of the hour. Pakistan is already producing top quality fruits and rice. With the establishment of the Belt and Road Initiative, Pakistan will be able to export its products to the entire Asia, Europe, and Africa. But the production of fruits and crops is very low, which can be increased by introducing the latest agricultural methods, advanced farm machinery, and developing hybrid seeds.

The establishment of fertilizer plants of NPK will also be part of the plan of action. The production capacity of those plants will be 800,000 tons, initially. Farmers will be given interest-free loans to purchase necessary agricultural machinery and tools to enhance their agricultural production. As climate destruction has become a challenge in contemporary times, Pakistan cannot rely on industrial development anymore. Progress in the agriculture sector may help Pakistan fulfill the dream of “Green Pakistan”, which is the vision of Prime Minister Imran Khan. Pakistan may learn from China which has managed to transform deserts into lush green pieces of land. It has also turned barren mountains into green hills by using modern machinery and terracing approaches.

Most of the Pakistani land is barren. This barren land can be used as a strength in the cvountry’s economy. It is part of the plan that these lands will be given to China on lease, which will be utilized to produce new types of seeds by keeping environmental factors in mind. Why is Pakistan’s development in the agriculture sector necessary for china? As China owns the biggest population and is an industrial country that imports most agricultural products from the USA, Australia, Russia, and Brazil, which is costly owing to transport expenses. But such expense can be diminished by importing its agricultural products from Pakistan.

The second phase of CPEC is also going to work on the storage of seeds and post-harvest losses. Godowns and warehouses will be established in Islamabad, Karachi, Peshawar and Gawadar. Processing plants of vegetables will also be established in the aforementioned cities. Besides this, establishment of a cotton processing plant is also part of the plan.

Quality seeds lead to quality crops, but in Pakistan seed is never much valued. Efforts of our honest and poor farmers can’t be doubted. But the problem lies in the quality of seed. In 2019, an important initiative was taken by the Pak-China Agri. Cooperation Exchange Centre (PCACEC) was established. Under this first move, an agricultural counsellor has also been appointed in the Chinese embassy in Islamabad. Chinese agricultural research will be introduced in Pakistan after further refining with the help of this resourcefulness.

Recently, some terrorist attacks in KPK halted the progress of CPEC but the development of the corridor has again gained momentum, which is pleasant to see. A healthy agriculture sector will eventually lead to a healthy and prosperous Pakistan. China has always been a key factor in the development of every sector of Pakistan. In return, a strong Pakistan may help China to curtail India.

Why is CPEC and China so valuable for Pakistan? The simplest answer can be freedom of foreign policy. So far Pakistan has been an element of western bloc and there have always been clashes of ideologies and interests between western countries and Pakistan. Once Pakistan manages to come out of the clutches of the IMF, it will achieve the real essence of freedom.

China and Pakistan have always been on the same fronts, be it any field. And besides that, there is always an easy adjustment possibility between these two neighboring countries in case of any clash. The simplest example is the way they reached an arbitration of border confusion in 1963.

Pakistan is in a venture to bring versatility to the contributors of its GDP, which is not bad in itself. But besides versatility, it should be aware of its potentiality too. More than 60 percent of its population resides in villages. As there is a universal law that first thing first, likewise, this 60 percent of the population may play a massive role to take GDP to skyrocket if they are given priority. Furthermore, Pakistani land is suitable for agriculture and this country has the potential to enjoy all the four seasons at once in different corners of the country.

In phase 2 of CPEC development, eight research centres are also going to be established. The biggest research centre is going to be established in Karachi regarding pest control. As the locust has always been a nightmare for the farmers, this institute may assist in dealing with this mighty challenge. Resistant seeds and plants will be introduced in the market. Seed plays 60 percent of the role in the production of quality crops.

Quality seeds lead to quality crops, but in Pakistan seed is never much valued. Efforts of our honest and poor farmers can’t be doubted. But the problem lies in the quality of seed. In 2019, an important initiative was taken by the Pak-China Agri. Cooperation Exchange Centre (PCACEC) was established. Under this first move, an agricultural counsellor has also been appointed in the Chinese embassy in Islamabad. Chinese agricultural research will be introduced in Pakistan after further refining with the help of this resourcefulness.

Luckily, proper legislation has been made regarding halal food. The global halal food market is worth more than $1 trillion. What if Pakistan contributes only two percent in this market? It will bring $20 billion to Pakistan. The Punjab and KPK and Islamabad are improving the production of halal food. But the exports of Pakistan hardly cross $20 billion. Ironically, no Muslim country is among the top three contributors in halal food production. Brazil, India, and Australia are respectively the first, second, and third-largest halal food producers.