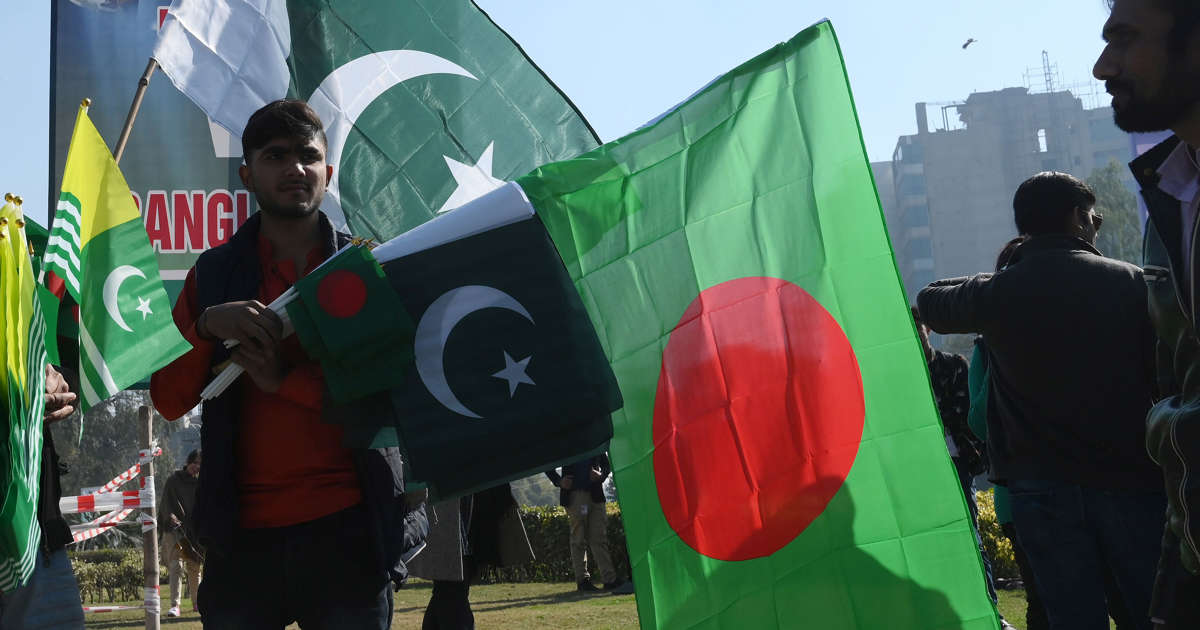 Bangladesh and Pakistan together make up five percent of the world’s population. The possibilities of market value in the case of export and import between these two states are inevitably huge. But the trade between the two countries of 390 million people is now only $600-700 million. This is a very small share in the exports of both countries. In 2019-20, only $50 million worth of goods went from Bangladesh to Pakistan. It has the potential to grow exponentially. The industrial sectors of both countries have expanded tremendously in the last 50 years. The industrialists of the previous generation knew the details of each other’s people and markets. The next generation of industrialists is unable to make use of that historical experience due to a lack of political action.
India and China have been in the midst of a war frenzy for the past year. But in the meantime, they have done business worth about 109 billion dollars. The example of Pakistan-India may be more relevant in this regard. The two countries exchange gunfire every week. There have been three full-scale wars between them. But in the meantime, they are selling products. In the 2019-20 fiscal year, goods worth $300 million went from India to Pakistan. Last year it was almost four times more. They may go back to the previous state in the future. If Pakistan-India can continue to trade despite the fragility of political relations, Bangladesh can do the same with both countries. Building a market in South Asia is becoming more urgent for Bangladesh to escape the European-US political caution.

Pakistan has put Bangladeshis on the priority list for visas since 2019. Both countries can make it easier to boost export trade. This will increase the market in Pakistan of jute, tea and tobacco in Bangladesh, Pakistan will also increase the export of yarn, sugar, among other products. However, in order to make the current trade balance more favourable for Bangladesh, policy support from Pakistan is needed.

However, there is much potential in economic relations between Bangladesh and Pakistan. But this should be realized by the government of Pakistan in its own interest. Because it needs Bangladesh’s help and support in reviving their fragile economy and raising various regional issues at all international forums. The sooner the Pakistani government realizes this, the better for them. Pakistan and Bangladesh can thus benefit politically from growing trade ties

After a long hiatus, Pakistan has already shown diplomatic interest in developing relations by sending an ambassador to Bangladesh. They have to go further. Islamabad has a lot of responsibility to heal the historical wounds of Bangladesh. Many Pakistani policymakers want Bangladesh to forget the 1971 Independence war and move forward. But it is not easy on the part of Bangladesh, it would be convenient in practical terms to solve the problems arising from the 1971 chapter quickly.

It is high time for Pakistan to realize the situation. It is not to be avoided. Pakistan wants to increase trade relations with Bangladesh. The Canada-based International Forum for Rights and Security, a think tank, recently published a report on Bangladesh and Pakistan. It has been shown there that Bangladesh is ahead in all areas of the index. Many Western economists have called on all countries to follow the Bangladesh model in the development of South Asia.

Bangladesh Commerce Minister Tipu Munshi has said that Pakistan is keen to boost trade and economic ties by maintaining good relations with Bangladesh. On 26 January 2021. he said there were problems in some areas in trade with Pakistan. If they were removed, trade would increase further. Both countries have huge potential to increase trade and commerce. This opportunity can be used.

He said Pakistan had recently imposed anti-dumping on hydrogen peroxide exports. Such measures hinder the development of trade. Any existing problem can be solved through discussion. The problems can be identified and resolved at a meeting of the Joint Economic Commission (JEC) between the two countries. Traders have an important role to play in increasing trade. Traders can increase trade by visiting each other’s countries. Necessary cooperation can be given in this case.
Pakistan’s High Commissioner Imran Ahmed Siddiqui, with whom he was speaking, said the Pakistani government wanted to move forward by developing trade relations with Bangladesh. There was ample opportunity to enhance trade and economic relations between the two countries. Ceramic products made in Bangladesh are being widely used in various government departments of Pakistan.
Siddiqui requested that visas for visits to Bangladesh be made easier for Pakistanis for personal and business purposes and that Dhaka-Karachi direct communication be introduced for the transportation of goods. He also called for a single country fair for Bangladeshi products in Pakistan and stressed holding the nin5hth meeting of the Joint Economic Commission.
In fiscal 2019-2020, Bangladesh’s exports to Pakistan were worth $50.54 million and imports worth $543.90 million. If trade complexities are removed, the export of Bangladeshi products will increase. Bilateral trade between Pakistan and Bangladesh for the year 2020-21 was $721.67 million, Pakistani exports being $650.21 million and imports $71.45 million. Bangladesh is one of the top 10 export destinations for Pakistani products.

Pakistan’s trade with Bangladesh witnessed a surplus of 46.65 percent during the first six months of financial year (2021-22) as compared to the corresponding period of last year. The overall exports to Bangladesh were recorded at $399.408 million during July-December against exports of $274.246 million, showing growth of 45.63 percent, Meanwhile, on a year-on-year basis, exports during December 2021 increased 52.01 percent, from $54.433 million to $82.746 million. Similarly on month-on-month basis, imports rose by 14.38 percent during December 2021 in comparison with exports of $72.339 million in November 2021.

Bangladesh and Pakistan cam profit by growing business relations. Pakistan can export cotton, yarn, fabric, leather, inorganic chemicals, vegetables and electronics (fan), halal foods to Bangladesh. There is a high demand for these products in Bangladesh. On the other hand, Bangladesh can export its world-class medicines, apparel, agro-products, halal foods, ceramics, among other items.  Bangladesh can benefit from using Pakistan’s Gwadar port and China-run CPEC. Bangladeshi products can be exported to Central Asia and imports made from the region easily.

As a result, Pak-Bangladesh ties would be further boosted. Both sides can also work in promoting cooperation in the areas of science and technology, information technology, health care, digital cooperation, SME [Small and medium-sized enterprises] development, tourism, and so on. Bangladesh has vast experience in dealing with refugees, tackling climate change, countering terrorism, human resource development. Pakistan has experience in the sector of religious tourism. Both countries can exchange these advantages.

In the first three months of the current financial year, the trade volume between Bangladesh and Pakistan is growing day by day. Bangladesh is now at the top of Pakistan’s foreign trade list. Although having some political problems, the bilateral relationship is growing. Bangladesh-Pakistan trade increased 36.90 percent in the first three months of 2021-22 over the previous year. The import of Pakistan from Bangladesh has increased 43.96 percent this year. It is true that bilateral trade is increasing between Bangladesh and Pakistan. Pakistan and Bangladesh should reap the benefits from growing their trade ties.

However, there is much potential in economic relations between Bangladesh and Pakistan. But this should be realized by the government of Pakistan in its own interest. Because it needs Bangladesh’s help and support in reviving their fragile economy and raising various regional issues at all international forums. The sooner the Pakistani government realizes this, the better for them. Pakistan and Bangladesh can thus benefit politically from growing trade ties.