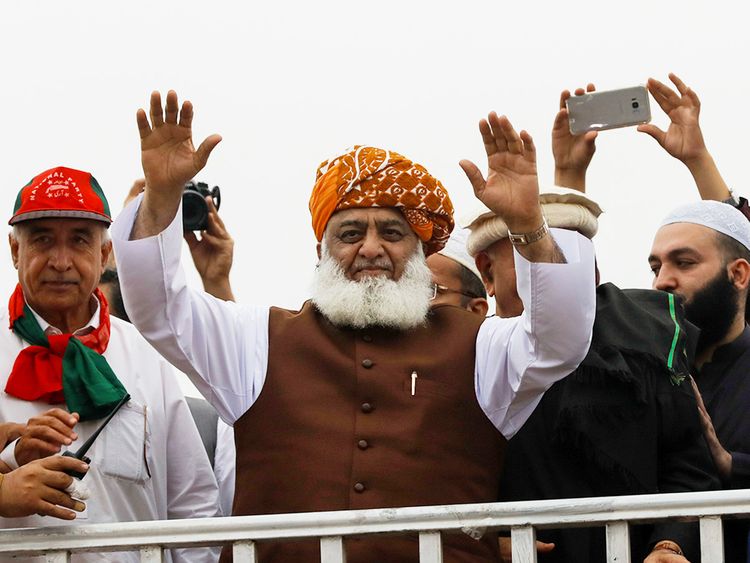 “We will shut down the roads when we reach Islamabad, not the government,” Fazl said, addressing a rally in Peshawar, which the KP Minister Kamran Bangash declared ‘flop show’, saying that the entire PDM alliance failed to even amass 200 people.

Fazl, however, didn’t specify when the alliance would march towards the federal capital.

The Peshawar rally was a part of a series of protests by PDM, which included demonstrations in Karachi and Quetta earlier this month. The Opposition alliance will now head towards Lahore and then Islamabad — but the dates are yet to be announced.

“We will keep fighting till the government drowns in the sea,” the PDM chief said, adding that the current setup had “damaged the country’s Islamic identity”.

He claimed that that the Opposition, ahead of a joint sitting of the parliament, “received threatening phone calls demanding that votes for the passage of bills be given in favour of the government”.

Fazl said the Opposition alliance has not demanded local body elections, rather it wants to hold general elections immediately — which are originally scheduled to take place in 2023.

The PDM chief, referring to the 2018 general elections, said the “stolen” votes of the people should be returned to them, alleging that the government has “made arrangements to rig the next elections once more”.

The Opposition has been persistent that the government “formed the basis for rigging” in the next elections when it bulldozed 33 bills in Wednesday’s joint Parliament sitting, including crucial bills related to the use of electronic voting machines (EVMs) and granting voting rights to overseas Pakistanis.

The joint Opposition has warned that it will move the Supreme Court against the legislation in the Parliament, with the government asking it to sit on the negotiation table instead.

‘These are not the people’s representatives’

For his part, PML-N leader and former prime minister Shahid Khaqan Abbasi said the incumbent government was “not the people’s representative”.

The former premier said the “events that led to the rigging of the 2018 elections” were gradually coming to light, as he reminded the people that former chief justice of Gilgit-Baltistan Rana Shamim had blamed ex-chief justice of Pakistan Saqib Nisar for “playing a part in rigging” the polls.

Abbasi said the government would now “rig” the next general elections, just like it had “rigged” the Daska by-elections. “The legislation done in the Parliament will not resolve the country’s problems,” he added.