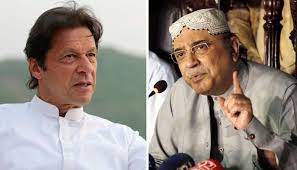 It is pertinent to note that the PM was addressing a rally in Karachi during a one-day visit to the city where he held a meeting with the leadership of Muttahida Qaumi Movement-Pakistan, an ally of his government in the Centre.

Yhe PM stated that “now my first target, who has been under my radar for a long time, is Asif Ali Zardari”

The PM also accused the former president of using the “police and thugs to get people killed”, engaging in theft and corruption and laundering money abroad.

“Asif Zardari your time is near,” he warned the PPP leader.

The PM also said that Zardari had funds earmarked to force PTI members to switch loyalties. “One of my MNAs told me he was offered Rs200 million,” he claimed.

He lashed out at the PPP co-chairperson for allegedly feigning sickness when he was summoned for hearings by the National Accountability Bureau in graft cases.

Turning his guns on other opposition leaders, the prime minister called PML-N President Shehbaz Sharif a “boot polisher”, saying he came up with different excuses every other time in courts to get hearings extended.

“Your time has come as well. You know that after the next three months you will be behind the bars,” the premier said.

He alleged that Shehbaz had laundered billions of rupees to his son living abroad, adding “I will further reduce electricity prices by retrieving money that Shehbaz’s son and son-in-law looted from the national exchequer.”

“I’ve been waging a struggle against these thieves for 25 years because I am fighting for my country.”

He said he was busy for the past three-and-a-half-year in “stabilising the country amid various disruptions”, warning the opposition that it should now brace for his response.

“I was thinking of somehow getting hold of their neck … the God listened to my prayer and they submitted a no-trust move. Now they have been trapped and their no-confidence move is going to rebound on them.”

He said his counter plan for the opposition was also “ready”.

“When we hopefully win [against] the no-confidence motion, I won’t stop. I will go after them (the opposition) and won’t spare them. My hands which had been chained will now be untied,” the PM thundered.

He alleged that his political rivals had bowed in front of every foreign power, criticising them for their silence on drone attacks during their respective tenures.

“These are the people who worship those gods where their money lies. They will never stand up for the country’s interest against those countries where their stolen money lies.”

The premier said that Pakistan should pursue friendships with every country and wasn’t against anyone but “I will never allow any country to take action against my nation’s interests.”

He rubbished criticism from the opposition for his criticism against the European Union (EU) in Mailsi on Sunday, saying that he had only pointed out the sacrifices made by Pakistan in the War on Terror.

The prime minister had lashed out at EU ambassadors who had issued a statement asking Pakistan to condemn Russia for Ukraine’s invasion. The premier had questioned the bloc whether it wrote such a letter to India which violated UN Security Council resolutions and revoked the autonomous status of Occupied Kashmir.

The prime minister announced he was going to tour interior Sindh soon and that it was his mission to rid the region of the injustices done by the “Zardari mafia for the past 14 years”.

He congratulated Karachiites for the Karachi Circular Railway project and said more effects of the development package for the city would be seen in the future.

He thanked the nation for paying the highest level of tax in the country’s history to the government which he said empowered him to reduce burden on the people.

The premier said the country was on the right path, with “high exports, tax collection, remittances and crop yields”.

When Sindh Chief Minister Syed Murad Ali Shah was asked for his views on the speech, he said the premier had been threatening the opposition of consequences for quite a few days. “But do whatever you have to within the next four to five days. You will not get a chance [to do anything] after that,” he added.

“These are Imran Khan’s last days,” he said while speaking to the media in Karachi. “Your (PM Imran) time is up, it is now our time to work for the people.”

“He spoke about others’ (opposition’s) political death, but his address made it apparent that his own political death is [imminent],” she said while speaking to the media in Islamabad.

Aurangzeb remarked that the premier’s remarks were a sign that “his mental condition is not stable”.

She said when the prime minister began speaking about his “targets”, she believed he intended to shed light on the employment opportunities and housing he had promised to the people. “But he [instead] went on to level allegations against his political rivals.”

“Your curses, threats and bullying will have no effect on the no-confidence motion,” she said.

Aurangzeb rubbished the prime minister’s allegation that the opposition’s agitation against him was a part of a “foreign conspiracy”.

“Was inflation a result of a foreign conspiracy?” she questioned, adding that the current political situation, where the PTI was losing the support of its allies, was, in fact, the result of the nation and the allies lacking confidence in the government.