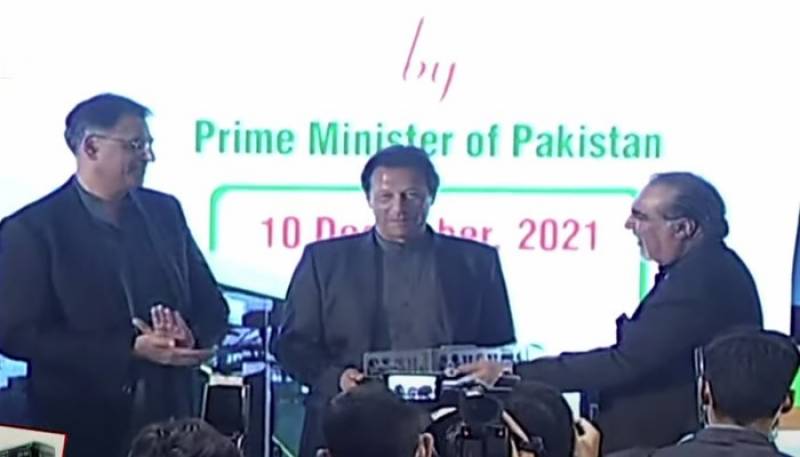 As per reports, the PM arrived in Karachi earlier today while being accompanied by the Sindh Governor Imran Ismail and federal Planning Minister Asad Umar.

The PM, while addressing the inauguration ceremony, congratulated Asad Umar and the Sindh Infrastructure Development Company Limited (SIDCL) “for pursuing this project with utter determination”.

PM Imran Khan regretted that Karachi’s transport issues were never given attention. He stated that “I have been seeing Karachi for 50 years. We have seen its transformation into a cave because we did not focus on its administration”

The PM further termed Karachi “Pakistan’s engine of growth”, he said the metropolis’ prosperity had a positive effect on the entire country.

“Making Karachi functional and successful means we are helping Pakistan,” he remarked, calling the Green Line transport system the first step towards building a modern city.

The PM further said that he was also pursuing the Greater Karachi Water Supply Scheme project, also called K-IV, through coordination with Wapda. The project will be approved by next month following which its groundbreaking will be performed, and it will be completed in 14-15 months.

“By Aug-Sept 2023, we will be supplying water to Karachi from Keenjhar lake,” he said.

The premier, while detailing other public welfare projects that the government is focusing on stated that the health card scheme was successfully being rolled out in PTI-ruled provinces. “I want to tell the Sindh government that provinces are contributing in it and they must also play their part,” he added.

The PM then lauded the Iranian capital by stating that even though the country was under US sanctions, Tehran had modern facilities because of its efficient management.

“Tehran collects $500 million [in revenue] and spends it through planning. In comparison, Karachi doesn’t even collect $30m,” he noted, stressing the need to give Karachi autonomy for the local government system to succeed.

He further urged the provincial government to reconsider its opposition to the federal government’s plan to develop islands near Karachi into real-estate projects.

“Our population is growing. We are building a modern city named Ravi City in Lahore and taking care of the environment there,” Imran said. “Pollution levels are also high in Karachi and it is necessary to have a modern city like the Bundal Island project. When we undertake projects, it is better if we do it collectively with coordination.”

According to details, PM Imran Khan also visited a bus station, where he inspected the infrastructure and also received a briefing on how the ticketing system works.

On the other hand, minister Asad Umar thanked the SIDCL for their efforts for the project, while adding that the Sindh governor was “supervising” the project since the PTI came to power.

He further added that in December 2020, the SIDCL became a part of the planning ministry and the government started working on the project.

He stated that “the order for the buses was also not placed and neither was the payment system designed; the operation and maintenance tender was also not placed,” he said, adding that the PML-N only thought about building a track surrounded by grills “with no other facilities available”.

The minister recalled that the project had been approved in 2016, and while the PML-N stayed in power for the next 28 months, the project’s infrastructure was not built.

“Karachi’s rights were not given to the city in the last three of their (PML-N and PPP’s) governments,” Umar remarked.

Umar criticized PPP by stating that the party had formed government in the province six times and four times in the Centre, but still had nothing to show for it.

The minister further called Bilawal Bhutto-Zardari an “innocent child”, the minister said the PPP chairman had asked for “time” to work for Sindh.

He addressed Bilawal by stating that “dear child, 50 years ago your grandfather was made the chief martial law administrator of the president of Pakistan. How much more time do you need?”

Umar further revealed that the federal government had also taken responsibility for the K-IV water supply project after it was abandoned, adding that the PC-1 for the project had been submitted to the planning ministry and work would begin within two months.

He stated that the PTI government was making solid progress on all the projects announced under the transformation programme. “We don’t just make promises, we deliver.”

According to the minister, the Frontier Works Organisation had been mobilised for the Karachi Circular Railway (KCR) project and work had begun on the ground. “Not only local, but international companies are also showing interest in the project,” he revealed.

As per the details of the Green Line project, work on the Rs16.85 billion federal government-funded bus project had begun after then-prime minister Nawaz Sharif inaugurated it in February 2016 by performing the groundbreaking.

The project was estimated to be completed by the end of 2017, but kept getting new deadlines. Since the launch of the scheme, the battered roads on either side of the route have turned into a great source of nuisance for commuters and for the shopkeepers doing their businesses.

On September 19, the first batch of 40 buses had arrived in the city which the planning minister had referred to as a “ray of hope” and “milestone”, calling it the beginning of modern public transport service for Karachiites after a long gap of 40 years.

On October 21, the second consignment of 40 buses for the Green Line project arrived in the city, raising the number of buses to 80 and rekindling citizens’ hope that the Bus Rapid Transit System (BRTS) in the metropolis was set to be launched. It is supposed to facilitate the travel of approximately 300,000 passengers daily.