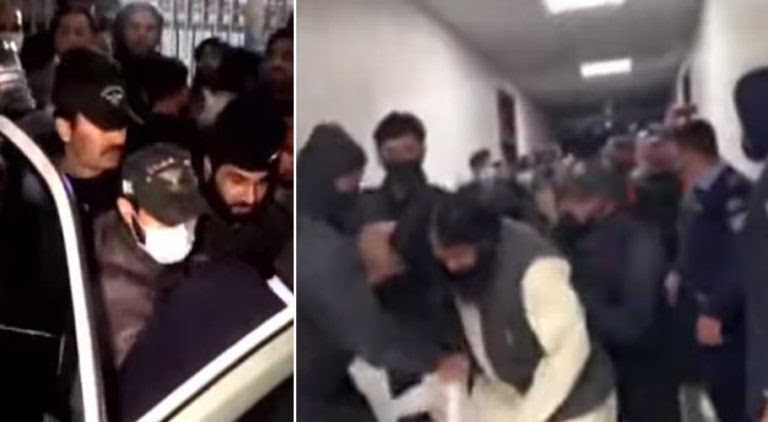 Islamabad police conducted an operation inside the Parliament Lodges after members of Ansarul Islam, a volunteer wing of the Jamiat Ulema-i-Islam-Fazl (JUI-F), entered the building in large numbers on Thursday.

During the operation, the police made 10 arrests. However, according to Federal Capital Police, two JUI-F MNAs including Salahuddin Ayubi and Jamaluddin went along with the arrested and have been insisting to be arrested along with the JUI Force.

Videos on social media showed police officials conducting a search inside the building, looking for “the ones in uniforms”, making arrests and forcing JUI-F workers out of the lodges.

Earlier, Islamabad Inspector General of Police Muhammad Ahsan Younus took notice of the group’s presence inside the building and suspended the officials in charge at D-Chowk, under whose watch the group members had entered the lodges.

Talking to a private news channel, he said: “People were hidden inside the lodges. We still wanted the matter to be resolved peacefully … but they beat and locked up police officials and did not hand over Ansarul Islam members.”

“We are also trying to prevent others from coming to parliament,” he added.

Later, JUI-F chief Fazlur Rahman arrived at the lodges and called on his party workers to gather in the capital.

“I want to tell my party workers to either reach Islamabad or block roads in their cities and resist this incompetent govt,” he said.

“We demand that our MNAs and others be released and that they (authorities) apologise. We have declared war and will not forgive them for this terrorism,” he added.

PML-N President Shehbaz Sharif condemned the operation and demanded for immediate expulsion of police from the Parliament Lodges.

“Raiding the residence of members of the parliament is [open] bullying. Police’s torture and arrests of parliamentary members is highly condemnable,” he said.

PML-N leader Maryam Nawaz said Islamabad police should refrain from becoming a “tool” of PM Imran and his government.

“Taking the blame for such madness-based actions is not appropriate. [You] will have to suffer losses,” she warned.