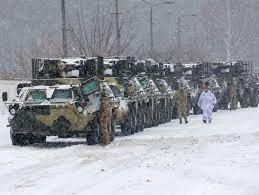 The Russian invasion of Ukraine set off global consequences, and even though no other countries got involved in the fighting, it could well qualify to be described as a world war. Though the fighting is limited to two armies with the same origin, much like the India-Pakistan wars of 1965 and 1971, the position of both countries as major wheat exporters, and Russia’s as a major oil and gas producer, has led to rising food and oil prices globally, thus placing a burden on the Third World.

Most of the nations comprising it were colonies in the first two World Wars, but are now independent nations. Some are directly affected, especially those that imported a large proportion of their grain needs from either country, but even if a country did not buy fuel from Russia, the rise in world prices meant that energy imports cost more. Are Sri Lanka’s woes a result of the Russo-Ukrainian war? It seems likely, not just because of food and energy, but because of the general inflation that has resulted.

The impact of globalisation has meant that the war’s effects have been felt all over the world. It is thus difficult to sort out whether negative effects on the global supply chains are because of the war, or the after-effects of the covid-19 pandemic, which is not yet over.

Perhaps the only source of relief has been the fact that this world war did not pick up where the previous one ended, with the use of nuclear weapons. When the USSR broke up, its only constituent to retain nuclear weapons was Russia. Ukraine and Kazakhstan, where Soviet nuclear forces were stationed, gave up their nuclear weapons. Ukraine had had nuclear weapons probably because it was the launching-pad for any Soviet invasion of Western Europe, while the nuclear weapons in Kazakhstan represented second-strike capability, as it would be hoped that US counterforce strikes would miss come of the more distant missiles, and leave them for use in a retaliatory strike. However, the real second-strike capability remained in the nuclear submarine fleet, with at least one on permanent patrol off the US Atlantic coast.

As Ukraine was a non-nuclear state, Russia opted not to follow its traditional doctrine, which would be to start any attack with a nuclear strike. This is a development of the Russian doctrine of beginning any attack with an overwhelming artillery barrage. Those overwhelming barrages are being used now by Russian forces, but have stopped short of nuclear warfare.

It is worth remembering that few or none of the the senior Ukrainian commanders started their service in the old unified Red Army. A new generation of commanders has come up, the most senior of whom, with just over 30 years of experience, have experienced life in an entirely Ukrainian military. Bothe Ukraine’s Commander-in-chief and Chief of General Staff were commissioned into the old Soviet Army, but have done most of their soldiering for the Ukrainian Ground Forces.

A return to normalcy may not be possible. The invasion has scared Sweden and Finland, making both scramble to join NATO. Ukraine’s approaching joining played a role in Russia’s decision to invade. Russia has been used to Sweden and Finland being neutral. One reason for joining would be to avoid nuclear attack. (NATO’s basis is the nuclear umbrella the USA provides.). However, Europe may keep on being destabilized, with the Russian bear feeling threatened. And with it the world.

However, the traditions they would have learned during regimental life from their seniors, and would be transmitting, would be rooted in the Soviet Army. That is a little like the common origin of the Indian and Pakistani Armies in the old British Indian Army. It is sometimes said that generals refight the battles of the last war.’ There are signs that the Russian-Ukrainian war is following those lines, as both sides fight World War II all over again, with heavy artillery barrages and attempts to achieve an armoured breakthrough.

The Russian military depends on the Second World War and the Cold War to provide its recent military history, but in the pre-Soviet period, there was World War I and even earlier the  Crimean War .  In these wars, the Russian performance was shambolic. One historian of the Crimean War concluded that the British Army was in horrible shape, and hopelessly antiquated, mainly because it was led by commanders who had learned the art of war in the Napoleonic Wars half a century before. The reasons the Russians lost the war was because they were even worse off. Again, the subalterns of the Napoleonic Wars were the generals of the Crimean War.

To a certain extent, combat exposes the military machine concerned to some criticism. The Soviets in Afghanistan, and the USA in both Vietnam and Afghanistan provide examples. However, the Russian military has come out of the Ukrainian invasion so far with its reputation taking a battering. The reports of senior commanders being sacked is indicative of worry above them, and is one of the signs that an army is doing badly.

However, now the indications are that the war will last for some time, ith the initial Russian attempt to take the Ukrainian capital having failed, and efforts now being concentrated on taking the eastern city of Sieverodonetsk, as Russia concentrates on securing and expanding the Donbas Republics, of Donetsk and Luhansk. The problem seems to bne that while the Ukrainisan military does not seem strong enough to get the Russian forces out of Ukraqine, the Russian military does not seem able to deliver the kind of killer blow that would end te war in its favour.

Military experts are observing the war very carefully, for this is the first example of two 21st century militaries fighting each other. On land, of particular interest is the performance of Russian armour against the Ukrainian NATO-origin antitank weapons.

Armour was invented in World War I to restore mobility on the battlefield. It was in World War II that it achieved this, something which continued afterwards. While Kursk in 1943 remains the largest tank battle, the armoured encounters of Pakistan and India at Chowinda in 1965, and Egypt and Israel in the Sinai in 1973, are comparable in size. However, the present war has not seen a major tank battle, one where antitank weapons would be used by Ukraine, to blunt a Russian offensive. Though Russian military doctrine depends on strong tank forces, the loss of 460-680 anks of 2700, there hasn’t been a major tank battle yet, where the dictum of a tank being the best anti-tank weapon could be tested.

The problem seems to be that the Russian tankers aren’t all that good. There are supply problems, with tanks abandoned after they ran out of fuel, and some tanks were driven off bridges or into ditches because drivers were inexpert, while some crews simply abandoned their tanks and ran. However, now that summer has ended the rasputitsa, or the muddiness of spring which makes movement on roads difficult, either side could attack. The alternative is to go on slugging it out until the political leaders go for negotiations.

The problem with that is that that might take time. While Russians and Ukrainians go on killing each other, the rest of the world is cut offf from both Ukrainian and Russian grain supplies. As that has driven up international prices, even those countries which do not import from them are negatively impacted. The same applies to oil. Pakistan is one of the countries hurt in the process.

A return to normalcy may not be possible. The invasion has scared Sweden and Finland, making both scramble to join NATO. Ukraine’s approaching joining played a role in Russia’s decision to invade. Russia has been used to Sweden and Finland being neutral. One reason for joining would be to avoid nuclear attack. (NATO’s basis is the nuclear umbrella the USA provides.). However, Europe may keep on being destabilized, with the Russian bear feeling threatened. And with it the world.