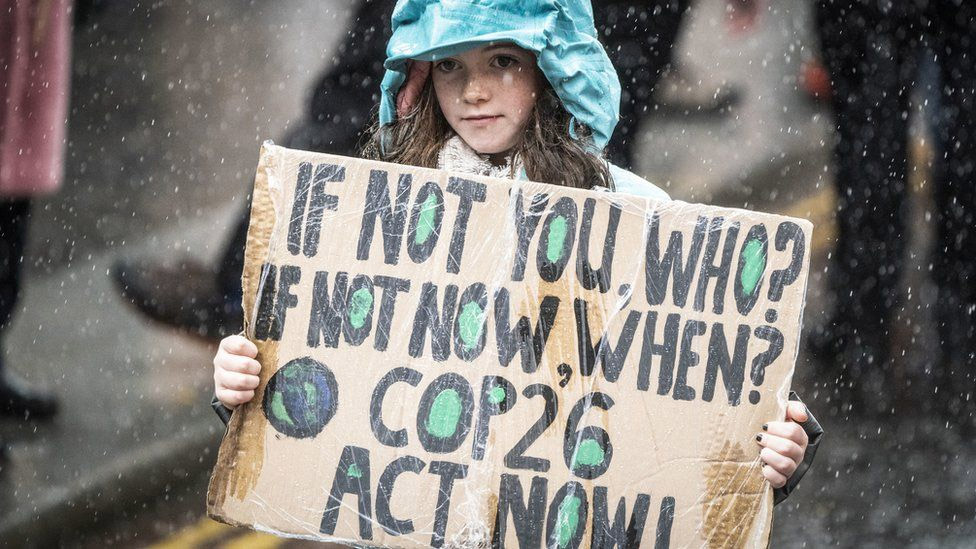 One of the major dissonances manifest at the COP26 in Glasgow was that the heads of state present were dealing with a crisis that would come to a head when they would be either powerless or dead. It might be argued that the climate climate change crises has reached the stage it has because the people, taking decisions about it were mostly men deciding about things that would take place so far into the future that their own lifetimes would be seen out.

Even now, the commitments made at COP26 were such as to commit the future, not the present.

The commitment of Indian PM Narendra Modi, who is today 71, was to bring India to zero emissions by 2050. When he himself would turn 100. It is not impossible that he would be alive at that time, but it is not that likely. Xi Jinping of China has committed to have China peak its carbon emissions by 2030, and to achieve carbon neutrality by 2060. While he would be 77 for the first goal, and probably still alive, and now that he has thrown Deng Xiaoping’s succession system out the window, in power, in 2060 he would be 107 for the second. That is an age that can be reached, but it will be uncommon even then. The US President, Joe Biden, is 78. That means he would be 137 by the time China becomes carbon-netral. It should be noted that that would break the current record for old age, but it is to be noted with concern that he made no commitment to the summit. Though his administration pushed through a spending bill with significant green components, his administration also issued 2500 new gas and oil

It is perhaps no wonder that Greta Thurnberg, the Swedish activist is leading a movement which coordinated school strikes two years ago. Md Thurnberg was then 16, and is now 18. In 2060 she would be merely 57, and even in 2070, she would be 67, a tad younger yhan Modi is today, and than either XI or Biden. At that stage she could be a grandmother, and worried about the world those youngsters might be growing up in.

However, it should be remembered that while Modi, Xi or Biden will not see the consequences of global warming, Ms Thurnberg will. In a worse-case scenario, she might live to see the earth unliveable.

Oil and gas seem to be the problem, whether in developed economies like the USA, or developing ones like China. The whole world depends on burning huge quantities of fossil fuels for two purposes: generating electricity, and moving people and goods. He solution is to stop burning fossil fuels for both activities. That means converting to electric vehicles, and powering them, as well as all other electricity with renewables, like solar and wind power, and hydel.

Mankind is already familiar with municipal laws forbidding illegal waste disposal. Dumping rubbish on the road is a criminal offence. What if that principle was applied to nations? The way The International Criminal Court uses to go after war criminals?

There are technical problems galore in undergoing these conversions. This is apart from the issue of how to pay for them, particularly since there are vast sums already invested both in fuel generation as well as transportation. Are those sums to be abandoned, or recouped? If the latter, how far can the world afford the delay?

Another thing which has not yet received sufficient attention, is how to scrub the atmosphere clean of the greenhouse gases that already are in it. Greenhouse gas emissions cannot just be left to end on their own, because though they will break down, the planet will be heated up, and experience the extreme weather that will make the planet, or rather large patches of it, too inhospitable for people to live in. Emissions have to be controlled to a level that the planet can handle.

There are certain factors militating against this, such as the belief in infini material progress, and the ability of science to do anything, such as solve the technical issues that are involved. At the same time, there is a minority, rightwing, faction, which says the science of climate change is wrong, that the world can carry on in its profligate old ways. This view was best expressed by US President Donald Trump saying that climate change was a Chinese conspiracy meant to stop America from being great again.

The choice of China was not fortuitous. It reflected the reality that China was trying to supplant the USA as the workshop of the world, and in the process was indutrializing very rapidly. Though China is still an economy of the order of the USA, it has about four times the population. While the USA has industrialized, polluting the world in the process, China wants to, and finds restrictions on greenhouse gases irksome. So does India. Both pollute like crazy, and want to pollute some more so that they can ‘catch up’.

It should be remembered that climate change is being blamed on colonialism. Colonialism did mean that indutrialisation, and the release of greenhouse gases, proceeded apace. Another consequence of climate change is the spread of zoonotic diseases, as viruses try to find other hosts, covid-19 being the worst so far, and probably not the last.

The clearing up of the air as the epidemic slowed down economic activity showed that the doctrine of progress, if need be at any cost, was responsible for the pollution causing climate change. Such epidemics cannot be an acceptable cost of doing business, but they do serve to indicate that global warming is caused by industrial activity.

The COP26 has also led to another thing being realized: national sovereignty is a problem. The actions of one country affect all the rest. India and China might claim that the industrialized countries do not have the right to atop them following, and adopting their lifestyles. The West, it should be noted, does not talk about rolling back the lifesyles of their citizens, just finding wats it can continue while not disturbing the environment.

Mankind is already familiar with municipal laws forbidding illegal waste disposal. Dumping rubbish on the road is a criminal offence. What if that principle was applied to nations? The way The International Criminal Court uses to go after war criminals?

That would raise a host of questions, but a necessary consequence would be an end to national sovereignties. The ICC is also a manifestation of the limits of that view, because ultimately the concept of Westphalian sovereignty covers that of one group within a state massacring another, so long as it has control of the state. The idea of a majority being able to do what it wants to a minority was illustrated as recently as by Donald Trump, and earlier by Hitler (who was first elected to power).

Incidentally, this leaves the idea of democracy as a panacea for all evils in trouble, because it wants the popular will to be followed. But what if the popular will wants industrialization and progress. That brings up the dilemma of countries like Pakistan, which will be badly affected, as cities like Karachi go under water. However, no matter what they do, matters will not change, not unless China, India and the USA cooperate.

For Pakistan, the first is a good friend, the second an existential threat, and the third a boss. Which can it persuade? Can any state in the Third World, including island-nations which may be flooded? Is COP26 too little too late?

It may act as a salve to world leaders trying to persuade younger voters of their concern, but they are probably not going to outlive the apocalypse that is looming.