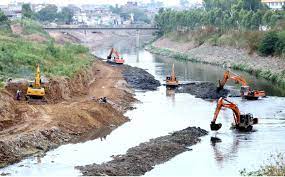 RAWALPINDI: Water and Sanitation Agency (WASA) Rawalpindi on the directives of Commissioner Rawalpindi Noorul Amin Mengal on Saturday kicked off the cleanliness work of 15 nullahs of Rawalpindi, passing through different areas of the city.

According to Managing Director WASA Muhammad Tanveer, they had completed dredging and de-silting work of Nullah Lai and sewerage lines across the city.

The Municipal Corporation Rawalpindi cleans the nullahs of the city every year, but this year, due to delay in cleaning of the drains, there is a danger of urban flooding.

The Commissioner Rawalpindi had ordered to immediately start cleaning work of 15 nullahs and Municipal Corporation Rawalpindi (MCR) had deposited Rs 35 million to WASA in this regard.

WASA Rawalpindi had also requested the Deputy Commissioner Rawalpindi to declare an emergency so that immediate action could be taken and the cleanliness work of 15 drains could be started.

He further informed that there are 15 small and big nullahs in the city, most of which fall in Nullah Lai. The MD said that WASA started the cleanliness work today utilizing heavy machinery.

It has also been decided to start the cleanliness work on all the drains at the same time so that the project could be completed within shortest possible time frame, he added.

The cleanliness work in Sadiqabad, Arya Mohalla, Zia Colony, Dhok Matkal and Kohati Bazaar has been started while the work on the remaining drains would be started from Monday.

In view of the forecast of heavy rains in July, day and night work would be done and the project would be completed in one month, he said.

Due to shortage of funds, the work would be carried out particularly under the bridges of the nullahs and at specific places so that the obstacles due to garbage in these nullahs could be removed and the flow of water would be restored. However, due to encroachments in some areas on these nullahs, access to heavy machinery is not possible and manual work would be done, the MD said.

The entire process would be overseen by the district administration while a committee comprising representatives of WASA, MCR and Waste Management Company would monitor the cleanliness work.