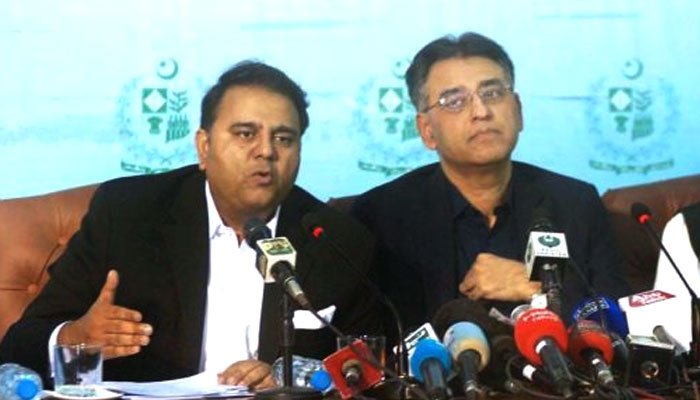 Information and Broadcasting Minister Chaudhry Fawad Hussain on Wednesday mentioned that ‘imminent failure’ of no-trust movement would show to be a deadly blow for the opposition and would draw curtains on its leaders’ politics as soon as and for all.

“We will lock them like pigeons are locked in a cage,” Fawad mentioned whereas addressing a press convention right here flanked by Planning Minister Asad Umar and different PTI leaders.

He mentioned that politics was not for the faint-hearted, including that the opposition events have established a market of mules and donkeys in Sindh. “Javed Latif (a leader of PML-N) himself had admitted that they (the opposition) were involved in horse-trading. We are ready for everything,” he added.

The info minister claimed that Imran Khan’s recognition through the previous two weeks had elevated. “The people are standing with Imran Khan and even a survey has confirmed this,” he added.

Speaking on the event, Asad Umar mentioned that PTI was going to organise a historic public rally on the decision of PM Imran on March 27 in Islamabad.

He mentioned that seven organisational committees have been shaped with the instructions to right away start a mass public mobilisation marketing campaign in each nook and nook of Pakistan.

Asad mentioned that PTI’s provincial presidents have been directed to formulate committees on the districts stage. He mentioned that each one celebration organisations have been instructed to start out mass mobilisation to take part within the “mammoth public rally” to specific solidarity with Imran Khan.

“One day they (opposition) demand resignation [from PM Imran], and on the other they desire immediate elections. At times they emphasise on a no-confidence motion and at others, they dream a national government or NRO… the opposition is getting more panicked with each passing day,” he wrote on his official Twitter deal with.